I watched Arrival for the first time last night, after about 2 years of people telling me to watch it. It’s a film that is all about humans coming into contact with non-linear time, and how the negotiation of that time has to be mediated through particular human registers, namely emotional experiences. The lead linguist Louise Banks, played by Amy Adams, who incidentally is the cool HEL prof that I want to be when I grow up, is tapped by the US military to translate messages from an alien pod that has landed in Montana. Eleven other pods have landed across the world, and all the countries they are in are working to translate their messages before something catastrophic happens.

The chief conflict in this movie is between different methods of interpretation, most notably between the primacy of science and language. This is brought up in an early scene where Louise and Ian (hot dad physicist) are riding in a helicopter to the military base, and he quotes from her introduction about language being the foundation for society before telling her she’s wrong– science is. This conflict extends on a national scale, when the Chinese government interpret a phrase the aliens, which they name heptapods, repeat as “weapon”, while Louise believes it means “tool”. When Louise is given this tool about three-quarters of the way through the movie– or, more specifically, when she realizes she has it– she becomes unstuck in time and aware that she is experiencing it non-linearly, which allows her to see the future and intervene before other countries attack the aliens. 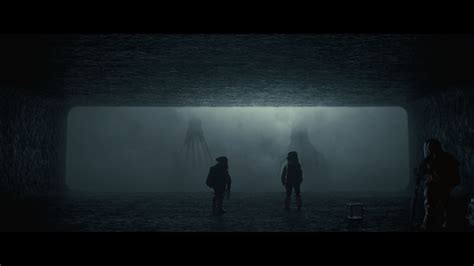 This non-linearity is accessible to Louise from the beginning of the movie through memories of her child, who dies after the central events of Arrival from a rare disease. Because of her possession of the alien weapon/tool, however, Louise experiences this future event as past, and her awareness of it affects other aspects of her life, most notably her relationship with Ian, which “begins” at the end of Arrival. We become aware of Louise’s non-linear experience of time at the same time she does, and we see clues in her “memories” that make it clear they’re events that haven’t happened yet– the heptapod her daughter makes out of clay, or the drawing of Louise and Ian next to the caged bird they take in when they converse with the aliens.

So not only is this movie staging a debate between science and language, it is also teaching us to understand a non-linear version of time, alongside Louise. I would say that this movie positions time as its own language, which not only affects spoken and written language but is itself a system that has to be decoded. The way that Louise does this, and the way the movie affectively pushes us to do it, is through emotion. The scrambled “memories” Louise has are centered around her daughter, maybe because they are the most emotional or strongest; we don’t know why. But her sorrow is the focal point of the movie, first as PTSD, then as anticipatory grief.

I have been thinking a lot this week about how sorrow reshapes time. Yesterday I also re-read Thomas Hoccleve’s Series, the first section of which, My Complaint, is about Hoccleve’s experience with madness and the grief and separation he feels after recovering, but still experiencing judgement from his peers and friends. He wants to demonstrate that his madness is gone, but he’s worried that it’s not– it could reoccur at any moment, sending his life back into disarray. Meanwhile, his disaffection is causing him to become depressed and isolated. Writing is his solution to both problems, but communicating his problems to other people, as well as dwelling on them himself, has the potential to backfire. He is forced to exist in two realities at once, one– his– where he is well again, and the other– everyone else’s– where he is chronically mad, and his balancing act between the two is wearing him down. His melancholy forces him to relive his past experiences, and he says everyone else does as well, although, as we learn later from his friend, everyone else seems to have forgotten about Hoccleve’s sickness altogether– it is just him who remains living in the past.

Mark Fisher’s hauntological melancholy is all about the recurrence of the past in the future, repetition with a slight difference. I would say that the viewer experiences Arrival as hauntological because *we* have to see Louise’s memories in a linear framework, even if it’s not *her* linearity. What I mean is we see the memory of the child playing with clay twice, but we only *know* that the heptapod is there the second time; the camera lingers on the bird in the cage longer in its second appearance, even though we’ve seen it before. For that reason I feel comfortable calling this a hauntological film, because we experience her “memories” as repetitions with a difference even if in a linear framework they have not happened yet and won’t repeat.

This brings me to the conclusion of the film, where Louise receives a vision from the aliens where General Chang gives her his private number and reveals the words she said to him that changed his mind about attacking the aliens. When she calls him in the present, she averts the attack and the world begins to work together, and once they stand down the heptapods leave.

I have been reading a lot about left melancholy, most recently Anne Cvetkovich’s work on depression and organizing, Depression: A Public Feeling. When imagining otherwise is not an option, despair (and for Cvetkovich, depression) is the result. Arrival is interesting because it seems to be buiding towards disaster, then has a mildly hopeful ending, then reasserts the tragedy of Louise’s foresight before ending on a note of hope– persisting in the face of sorrow, it seems to say, is not only possible, but right. I do think this movie is hopeful in the end, which is interesting given the overwhelming precedence of media where this kind of coming together doesn’t happen– and real life, where (this week, for example) vaccines are being hoarded by the US which is creating not only a public health disaster in India but is prolonging and worsening COVID for everyone. The kind of hope Arrival holds just isn’t happening, and I’m not sure how to relate to the movie’s ending because of that.

My main takeaway from seeing these two texts together, and I want to think more about them with each other, is that they both use different methods to express how emotions reshape one’s experience of time. Louise, with supernatural help, becomes unstuck and relives her future over and over. Hoccleve wants to break away from his madness but his sorrow, and the opinions of others, keep him there. The main salient experience here, though not the only one, is melancholy. Melancholy allows us to reimagine how time works and how we situate ourselves within it, for good or bad. In the case of Hoccleve especially, chronic melancholy is outside of normal time, and observers are unable to understand how it flows or whether/why it is over (or why it’s not). For Louise, what would normally be grief at the death of a child is stretched by non-linear time into something else, an anticipatory sorrow that is excessive and troubling to those around her, and that in turn is the main conduit for her to access non-linear time in the first place. Grief becomes melancholy when it is in the wrong time– too long, too excessive, out of order. Melancholy allows access to different modes of experience, but those experiences vary widely and are not always positive. Still, speaking of emotional power, in both cases melancholy allows us access to non-linear or non-normative versions of time, opening up experiences that center the non-human and help us as readers or viewers critically look at our own perspective.

“The Tralfamadorians can look at all the different moments just that way we can look at a stretch of the Rocky Mountains, for instance. They can see how permanent all the moments are, and they can look at any moment that interests them. It is just an illusion we have here on Earth that one moment follows another one, like beads on a string, and that once a moment is gone it is gone forever.”– Kurt Vonnegut, Slaughterhouse Five

Need help with the Commons? Visit our
help page Send us a message

Built with WordPress | Protected by Akismet | Powered by CUNY